I have always been playing in the dirt, but now I have a visa to prove that, in fact, the dirt that is always splattered my clothes and caught beneath my nails is professional. Now, I am officially playing in the dirt, and by dirt, of course, I mean clay. Last week, I started the obvious part of my journey to become a skilled potter. I took a flight from North Carolina to Japan to become an apprentice potter at a small studio in Kasama, Ibaraki. I met the family that owns the studio during my time working as an ALT (Assistant Language Teacher) in Japan with the JET Programme.

For two years, I lived in small traditional house with soft tatami mats and large, picturesque windows at the foothills of verdant, rolling mountains. I was paid a decent salary for the work that I did, provided with health insurance, 20 paid vacation days, and through my school an excellent and caring environment. I cannot complain about my experience on the JET Programme, but my passion in life is not teaching English (surprise!).

I entered the JET Programme out of my interest in Japanese culture, mainly Japanese minimalist ceramics.  I took my role as teacher and ‘cultural ambassador’ seriously, but I also made sure to share my interest in ceramics and pottery from day one. Before I even came to Japan, I emailed a potter I had seen in a ceramic magazine, Euan Craig, who lived in Japan making ceramics. I asked for advice on how he had gotten started and any resources he used. He recommended the book, “The Japanese Pottery Handbook” by Penny Simpson. I used the book when deciding my placement requests for the JET Programme. I chose places with established ceramic traditions that matched the clay body I had used in college.

When I first started work, I told my students and teachers about my interest in ceramics in every jikoshoukai, a structured introduction.  Some days, I walked into the teachers office and there would be various flyers about ceramic events or photocopied textbook pages of ancient Japanese rope coiling techniques in highly indecipherable kanji. On weekends, I would seek out ways to get involved with pottery whether it was local classes or museum exhibitions. But it is hard to break into ceramics in Japan without an introduction, and honestly my limited Japanese language skills.

It wasn’t until almost the end of my first year, that I met the Kobayashi family. They are close friends of a teacher at my school. This teacher sat a couple of desks over me and always seemed to be either napping or reading a manga. I honestly wondered if he even taught for the first eight months or so, until another teacher told me he retired last year was helping fill in for a teacher who left this year. At the school “class match,” or intramural sports day, we were both assigned to the volleyball courts to basically sit in the sun and occasionally keep score. 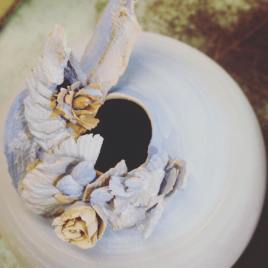 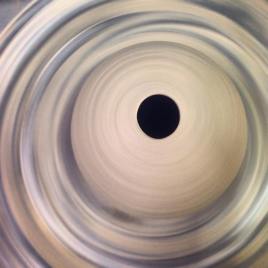 Bud Vase – On the Wheel 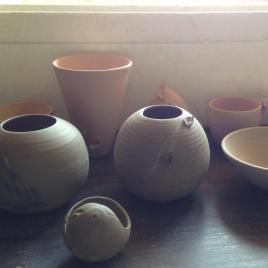 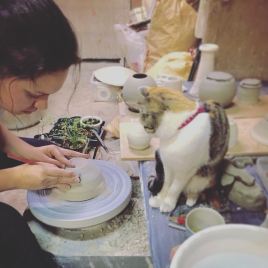 Mediocrity in the making

Towards the end of the day, he turned to me and asked in Japanese if I wanted to meet a potter he knew in Kasama, and after a second of shocked speechlessness, I replied with every phrase I knew to be “Yes, thank you. I would love that.” in Japanese. Up to this point, I had never considered that another teacher might know a potter, or might want to help me. My supervisor, another English teacher, helped set up the details of the date. Several weeks later on a Sunday, I met this potter along with my supervisor and the other teacher.

It was a casual visit. I didn’t feel as though I was being treated as a someone with skills, but rather as someone who is ‘interested.’ They let me use the wheel and make a couple of bowls and vases, while they all sat and talked around the table. After I had finished, they asked me if I wanted to trim the pots or should they, and I answered that trimming was my favorite part. Then after we all went for coffee. And the visited ended. When I returned home, I felt even worse than before because it was as though I had been given a glimpse of life, that of a potter and his studio, that I had not before. Now I knew what I was missing.

The following Monday, my supervisor told me that they asked if I wanted to come back the following weekend to trim the pots, and gave me their contact information. I went back to trim the pots the following weekend and then a couple weeks later after the first firing to glaze the pots. This was my third visit, and I thought final visit because afterwards my pots would be done. I was sitting in a corner of the studio painting small glaze designs on my pots. I painted flowers and trees and various other organic motifs on some of the bowels but then I started to mix them with hexagon based designs. I had been studying basic geometry in my quest to draw “the perfect cube” by hand. So my mind was fixated on this pattern.

As I was finishing the last cup, Kobayashi-san came to where I was painting and stopped. He asked me why I was painting hexagons. I replied, that hexagons are the perfect shape. He told me that when he was a young potter, he also had drawn hexagons in his artwork and that he thought it was a mark of skill. After I had finished painting all of my works and was about to leave, he told me that if I wanted to come back and work free of charge, I was welcome. I asked him if he was serious because if he was I would be there every every weekend I could.

For a little more than a year, I went to their studio every weekend that I was able and practicing and learning as much as I could. I was mostly on my own while I was on the wheel, everyone in the studio mostly engaged in their own work. Nearing the end of my second and last year on the JET Programme, I knew I was not ready to be finished with Japan. I wanted to stay and do pottery longer and continue to learn, but for that I would need a visa. I asked a friend of mine who could speak Japanese to help me ask the family if they would sponsor a cultural activities visa for me.

Now almost more than a year since that date, I am back in Japan and from Monday to Friday 9a.m.-5p.m. I’ll be playing in the dirt.

One thought on “Hexagons are the perfect shape.”